I recently spent an afternoon in a school with a modern language department.  Alongside all MFL teachers in the school, the specialist TA and the two initial teacher trainees also attended the session.  I won’t name the school, or the area in which it is located, but it is an ‘improving’ school catering for a generally white working-class area.  I know the school and its headteacher quite well.  Huge progress has been made there under the current headteacher’s leadership by systematically developing more rigorous curricular thinking and practice, and in growing the expertise of teachers in evidence informed pedagogy.  I agreed to spend some time with the MFL team at the headteacher’s request.  The headteacher was uncertain whether the growth in expertise among other teachers was being applied as strongly in MFL and felt insufficiently equipped to make a judgement.  In my experience it is often the case that headteachers (who are not linguists) lack confidence in judging curriculum and teaching quality in MFL.

All members of the team were native speakers of languages other than English, mostly the language they teach (though not in every case).  All had trained in this country, the majority in the past five years.  The languages taught at the school are French and Spanish.  I started by asking them to talk to me about what they do at the moment.  This they did with enthusiasm and obvious pride.  They talked me through the textbooks they use, and why they had chosen them, showed me a number of ‘knowledge organisers’ they had designed (hugely detailed and clearly the result of many hours of hard work), and multiple worksheets and other teaching materials.

After a while, I suggested they go on to talk about the problems they thought they had, despite their hard work and commitment, and what thoughts they had on how to solve them.  In other words, why was I there?

The responses in summary: The students don’t remember the language we teach them, sometimes not even from one lesson to the next.  They can’t use or apply what we teach them unless it is in a tightly scaffolded task.  Their pronunciation is poor, despite the fact that we always ask them to repeat new words individually and chorally.  We cannot get them to use the target language in class even for everyday purposes.  We have tried to give them a set of fixed sentences to use (eg ‘may I sit down please’), but it only helps a little: the better students read the sentence from the sheet, and others don’t even manage that.  We have gone out of our way to make sure the topics we do are relevant and interesting; we use texts featuring lots of up-to-date and relevant themes and young people from diverse backgrounds because, although the school is not very diverse, we feel they should know more about the world beyond this small area.  It might have made a bit of difference to their motivation, but not much.  Generally they perceive languages to be difficult, but for them this doesn’t much matter because they see them as largely irrelevant.  Everyone speaks English.

Still no negativity from the teachers, not a note of denigration of the students, for whom they clearly have respect and warmth.  Just frustration and disappointment.

I could have taken two paths at this point in our meeting.  One option would have been to say that these are common problems to a greater or lesser extent, and it sounded as if they were doing some great work, but the catchment was difficult, and the task hard, so really just doing all these things even more energetically was as good as it was going to get.

The second option was to set about trying to build on the work I know they have done as a whole school on curricular and pedagogical research and theory, and try to bridge it across to MFL.  As the first option felt like an abrogation of responsibility, I decided to have a go at the second.

First of all, I checked that they really did know about some universal theoretical basics: cognitive load theory, including the construct of the working memory and the long-term memory, the role of ‘knowledge’ in the curriculum and some core principles of curriculum design such as selection, sequencing, spaced practice, recall and desirable difficulty; intrinsic motivation as the product of success, and the concept of self-efficacy. All this was familiar material to them from the series of training sessions the school has run over the last couple of years.

The next part of the conversation was harder.  We talked about whether these concepts could explain some of the difficulties they were experiencing with their teaching specifically of languages, and  whether there could be different ways of approaching the curriculum and its delivery which might be more effective.  Here I noticed a classic problem with teacher development.  The general training they had received had been interesting, but it had had no impact on their practice because it had not been ‘translated’ into the context of their subject.  No specific new teaching approaches or techniques had been identified or practised as a result of the training.  This phenomenon is even more common, in my experience, for MFL teachers than it is more widely,  because trainers and speakers on evidence based approaches to teaching rarely know anything about MFL teaching specifically.  Examples tend to be from subjects which are learnt in English to make them more accessible, and tend, often, to be heavily weighted towards mathematics or history.

Where to go next?  I needed to get them started on bridging the gap between the knowledge they had from their general training and their thinking and practice in languages.

A lengthy series of questions, answers and discussion followed, during which I tried to nudge them towards seeing how some of the principles they had learned about could work in MFL, and how some of the problems they were experiencing could be illuminated and explained.  We talked first about the very concept of content knowledge, what this actually was in the learning of a foreign language, how it could be identified, and how high leverage content could be prioritised and sequenced.  This brought the identification of core, frequently needed vocabulary to the fore, but also essential basic grammar which is needed in almost every sentence.  They were quick to identify the need to be fluent, for example, in the application of parts of essential verbs such as to be, to have and to do. (It is extraordinary how many students with 4 or 5 years of language learning under their belt simply cannot do this).  We drew out the distinction between content which may appear communicatively foundational (for example what is your name?) but is certainly not linguistically foundational (comment tu t’appelles? can be memorised but not manipulated by a beginner, whereas I am / you are or I have / you have clearly prepare learners for next stages as they are linguistically foundational).

We talked about the specific teaching of phonics, sound-spelling relationships, in the early stages of a MFL course, something they had never considered as a team.  They did not really know it was ‘a thing’.  We discussed how a sequenced approach to teaching and practising the differences between English and the target language can give students confidence when reading aloud and relating what they hear to words on the page.

And we talked a lot about cognitive load, thinking about the importance of focussing on a small number of key linguistic features at a time, stripping away the extraneous cognitive load, practising and recalling content to embed it in the long term memory, moving on to the next chunk of content, and then revisiting the first stage later to revise, re-practise and integrate with the stage that followed.  They quickly began to identify that their current schemes of work were not structured in this way.  A worry surfaced that this approach might not allow them to cover the sheer volume of content that was expected, so we talked about numbers of words, the importance of frequently needed words having priority, and considered the number of school weeks between year 7 and year 11.  They had never had a conversation about volume of content at this level of precision before.

We made some connections between MFL teaching and early reading.  We talked about the importance of reading texts which are fully aligned with decoding ability to support early readers in order to prevent giving up, the development of a guessing habit or low self-perception.   I shared some research that tells us that to ensure adequate comprehension of written texts it is generally necessary for the reader to know around 98% of words[1].  Very quickly the teachers saw that so much of their practice which involved exposing MFL learners to texts where learners could not possibly know a significant proportion of the vocabulary or grammar was likely to be counterproductive.

Finally, we talked about motivation.  I mentioned the principles of motivation highlighted by Peps Mccrea in Motivated Teaching: motivation is about attention, and where students allocate attention is dependent on things such as previous success experiences.  Students will decide whether the task in hand is worth their time based on three things: 1) the value they put on the task; 2) their chance of success; 3) the time and effort they will have to invest to be successful.  The teachers quickly identified that while they have some of the preconditions for success already in place, the major elements to work on were designing the curriculum and its delivery so that students really had a good chance at achieving success and a sense that this success would lead to incremental knowledge and ability gain over time.  They could see that this would provide a virtuous feedback loop and had the potential to really enhance motivation.

Without prompting, as our time was drawing to a close, the head of MFL asked what they should do next.  She identified what a daunting task it would be to rework all their planning in the light of our conversation.  So we used the final part of the afternoon to look at the NCELP schemes of work and supporting resources.  I pointed out how these had been built on the basis of MFL-specific research which was aligned with the principles we had discussed earlier in the afternoon.  We looked at how phonics could be taught, how vocabulary could be systematically built, cognitive load managed and texts aligned with taught language, giving students a really good chance of remembering more and being able to apply more language over time, creating that cycle which would build motivation sustainably.

The development of truly evidence-based approaches to MFL learning for the UK context is enormously exciting, even more so because of the alignment with the work of the inspectorate, and the prospect of a reformed GCSE that reflects the same importance of clarity about content identification and selection.  We have for the first time in decades the chance of a real revolution on MFL teaching and learning in our schools.

The author is an experienced MFL advisor and consultant

[1] Hu and Nation (2000) reported that their participants needed to know 98%–99% of the words in texts before adequate comprehension was possible. 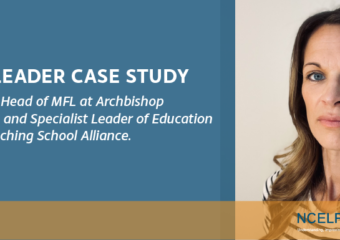 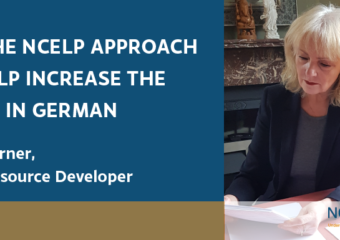 How the NCELP approach can help increase the uptake in German 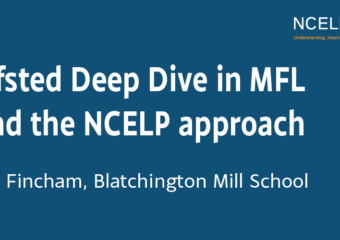 Ofsted Deep Dive in MFL and the NCELP Approach